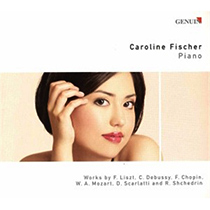 “The pianist clearly demonstrates her excellent artistic calibre with her first recording. She masters all the technical demands of the literature in a most impressive manner, with a somnambulistic certainty coupled with a controlled touch.”
Klassik.com, 12. August 2006

“An interpreter whose performances decisively separate her from the mass of other talented, industrious pianists. She performs her programme, which contains a number of virtuoso masterpieces, not only with propriety, but also with a commanding degree of imagination which compels the fastidiously listener to sit up and take notice. Caroline Fischer has something to say across the whole board of the musical literature presented here, she endows the „Hungarian No. 13” with flair and gypsylike pathos, not only in the short grace notes, but also in the dance-like, frivolous finale. She knows how to colour the dramatic vicissitudes of the Don Juan fantasy and to make them stand out from one another – piano-playing of a high degree of solidity and, in the decisive moments, also of a certain ignitable, burning power.”
Peter Cossé, Klassik-heute.de, 1. August 2006